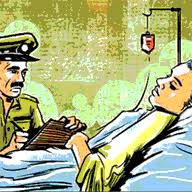 The deceased was married to the appellant in the year 1999. He was unemployed at that time. Later, he secured employment in the C.R.P.F.. He did not take his wife on the basis that he could not take her far away. Wife continued to reside with the mother of the deceased at her house. Appellant used to harass his wife and had illicit relationship with the wife of his brother. A Panchayat was held. A settlement was arrived at, pursuant to which, after four years, when the appellant was transferred to Delhi, he assured the mother of the deceased that he will not harass his wife and he started residing at the house along with his wife and mother-in-law. The appellant continued to have an affair with the wife of his brother. On 23.01.2008, the mother of the deceased went to the matrimonial home of another daughter. On 24.01.2008, at about 06.00 P.M., the appellant came to the house under influence of liquor, and then both caught fire.

On reaching hospital, she gave statement that she sustained thermal burns when her husband was trying to ignite a match stick for smoking; accidently a fire erupted due to petrol leaking from the tank of the motorcycle as told by the patient herself. Patient got burnt along with her husband. Patient is unable to tell the cause of kerosene smell from her body. the deceased had deep burns present over her face, neck, anterior trunk, lower part, both upper limbs, portions of both lower limbs.

The first dying declaration dated 24.01.2008 was also recorded by the Investigating Officer without certificate issued by the Doctor in the presence of husband. The biri has not been recovered. Clothes were seized from the house which were in burnt condition and kerosene oil was present in the house immediately after the incident

The second dying declaration of the victim was recorded by the Investigating Officer in his daily diary on 25.01.2008. The relevant extract of this reads herein as under:-

Ram Kumar have come to the Police Station after investigation vide DD No. 50-

A, dated 24/01/08. On the receipt of the call, I reached the place of occurrence i.e. H.No. RZ-40, Mataji Line, Sultan Puri Road, (sic) School, Gopal Nagar, Najafgarh where many burnt clothes were lying in the gallery of the house.The seat of a passion motorcycle bearing Regn. No. HR-14B-1992 was found burnt and one burnt cream coloured jeans shirt was also lying behind the motorcycle. And one ladies” Kurta, one cardigan, a salwar, shawl were lying burnt near the front wheel of the motorcycle. The foul smell of kerosene oil was coming from the whole house.The SHO arrived at the spot and after enquiry it was learnt that one Jagbir Singh lived in the house as “gharjamai” (son-in-law living at the in-laws” home) alongwith his wife Santosh and mother-in-law Chhoti Devi. The mother-in-law Chhtoi Devi had gone to the matrimonial home of their younger daughter Rakesh at Rohtak. And as per the neighbourers, husband-wife were living all alone in the house and the motorcycle got fire due the leakage of petrol from the motorcycle.Jagbir works as sweeper in CRPF. G-91 Mobile Crime Team was called on wireless. The photographs of the place of the occurrence were taken by the Crime Team and all the burnt clothes and the can of the Kerosene oil which was kept near the drum in the interior room and a lot of kerosene which was also lying outside and on the floor were taken into the police possession as a piece of evidence by means of a memo.Thereafter, I, the SI reached S.J. Hospital after receiving the information where Jagbir s/o Sh. Devi Singh and Santosh w/o Sh. Jagbir Singh were admitted vide MLC Nos.17608/08 and 17609/08 respectively. Jagbir was 45% burnt and Santosh was 60% burnt. The doctor wrote in (sic…) that when Jagbir ignited the match-stick for smoking, the motor-cycle caught fire accidently as its petrol tank had been leaking.The patient was unable to tell the cause of kerosene oil smell from his body.

Santosh Devi w/o Jagbir Singh deposed that I reside with my husband Jagbir and mother Chhoti Devi in the house.Earlier there had been some problem between me and my husband. I had got married in the year 1999. But for the last one year, I have been living with my husband happily. There is no such quarrel between us. Today on 24/01/08 my mother had gone to the matrimonial home of my younger sister Rakesh at Rohtak. My husband Jagbir came back in the evening from his duty as sweeper in CRPF.We have had our dinner and were preparing to go for sleep. I locked the gate while my husband was smoking “Bidi” near the motorcycle.All of a sudden, the motorcycle caught fire.Jagbir was trying to extinguish the fire and his clothes also caught fire.Both of us screamed and shouted for help. Our neighbours saved both of us by jumping the wall (of our house). No one has done this intentionally. You have recorded my statement and read over the same to me. I  have heard the statement and the same is correct.

LTI of Santosh Devi Thereafter, the statement of Jagbir Singh s/o Lt. Sh. Devi Singh was recorded who also gave the aforesaid statement and Mrs.Chhoti Devi also deposed the same and told that there was no dispute between both of them and they were living together happily.Both the husband-wife had caught fire because of the catching of the fire by the motorcycle due to the smoking “Bidi” by Jagbir and leakage of petrol from the motorcycle. No one has intentionally done this. I do not suspect anyone. All the facts were apprised to the SHO and the call was held pending.” (Emphasis supplied). Accused wanted to make use of first two Dying Declarations in his favour.

On 24.01.2008 in the afternoon, my mother left for matrimonial home of Rakesh at Rohtak. My husband Jagbir works as a Sweeper in CRPF, who came from his duty at about 6 p.m. in a drunken position and said to me. “You want to live with me”. I said ‘Yes’, then Jagbir took me to a big room and picket up a ‘can’ of kerosene oil and poured kerosene oil upon me. He poured kerosene oil upon me and poured less kerosene oil upon him. Then, I got myself free from the clutches of Jagbir and ran towards a small room, and he came to me after following me, and then he ignited a matchstick and threw it upon me, and immediately my clothes caught fire. After that when I, in order to save myself, ran towards main gate, he caught me from behind as a result, I fell down near a handpump, which was installed at the house. Thereafter, my husband brought out the pipe of petrol tank of the motorcycle, which was lying in the Chowk, as a result of which fire erupted near the motorcycle, and Jagbir also caught fire and when I raised hue and cry to save, the one boy namely Dinesh Jain, who resides in the neighbourhood, came inside by jumping the main gate and broke the lock placed inside the mghain gate with the help of ‘Hathi’ of the handpump. Then all the neighbourers saved me and Jagbir while burning. As my husband had extended threat to me, I could not give my statement on the same very day. My  husband has tried to kill me by pouring kerosene oil upon me because of the reason that he has illicit relations with his ‘Bhabhi’ namely Babita. You have recorded my statement in presence of my mother Chhoto Devi and my ‘Jija’ Vinod, which I have been read over and is correct.”

It is strenuously argued by the appellant that the dying declaration dated 27.01.2008 is the result of conspiracy. The mother-in-law of the appellant is the owner of the property. She is a widow. She had three daughters, one of whom was the deceased. The other two daughters were married. PW1 is the husband of one of the daughters. It was to eliminate the chance of appellant succeeding to the property that PW1-the co-brother of the appellant visits the hospital where the deceased was admitted. She is tutored. The result of tutoring is the controversial declaration dated 27.01.2008. This fact receives support from the admission made by PW1 that it was he who made the call to the Police Officer, without any call from the hospital authorities, came and recorded the dying declaration. As far as the dying declaration made on 27.01.2008 is concerned, particularly, when Doctors were near at hand, the Investigating Officer ought to have taken the caution of obtaining a certificate after the Doctor put questions to the patient for ascertaining her condition. It is equally true that a declaration does not appear to be preceded by questions put by the Investigating Officer to the deceased from which he could ascertain details from which he could have received verification about her condition. Death took place only on the sixth day after making the declaration on 27.01.2008.